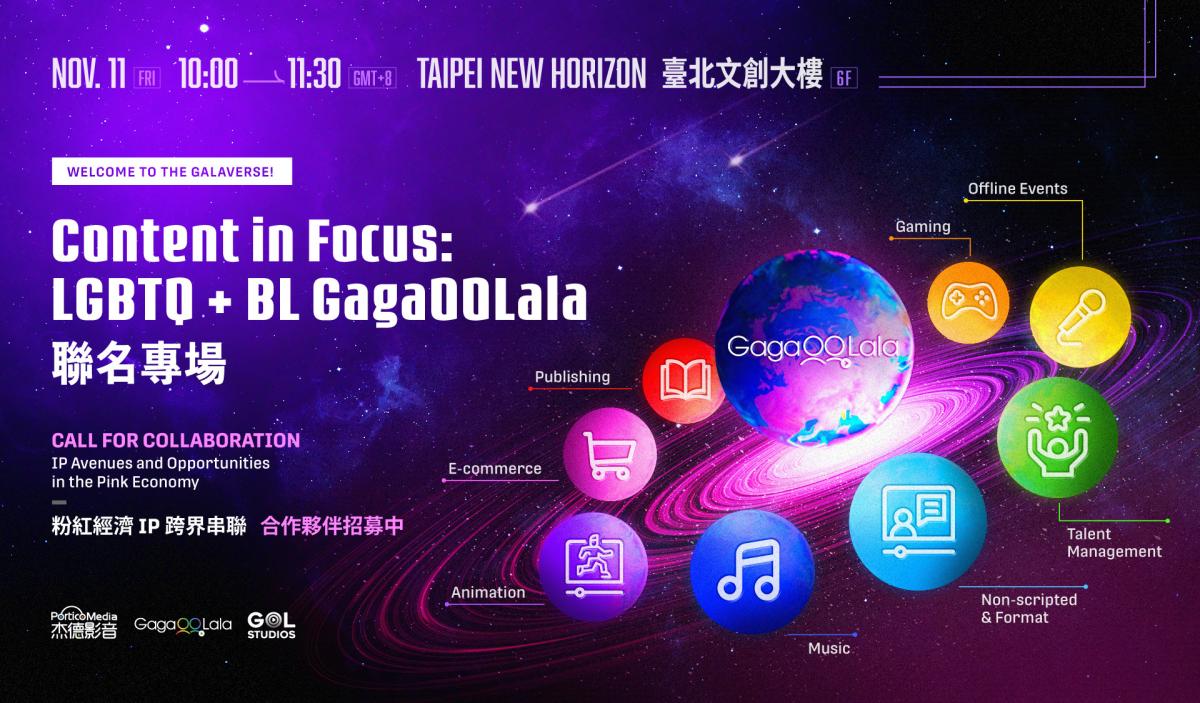 As a dynamic media and entertainment hub specializing in linear, digital and OTT spheres both at local and global fronts, Portico Media has long devoted itself to taking Taiwanese brands and content out to the world. From terrestrial programming and distribution, original content creation and production, digital media branding and ubiquitous social media outreach to a global streaming service, Portico Media has achieved continuous success across all stages of the media value chain and currently stands at the forefront of Taiwan’s audiovisual content landscape. In 2017, Portico Media kickstarted its niche LGBT OTT platform, “GagaOOLala.” The service officially went global in 2020, and since then, it has grown to become the largest LGBTQ and BL streaming platform in the world, with over 2.5 million active members and over 10 million monthly stream traffic. GagaOOLala is currently available across 247 territories worldwide.Through its collaborative efforts with international partners on both production and distribution, GagaOOLala has successfully spearheaded the production of 60+ GagaOOLala Originals which have been licensed and distributed across the globe, collectively traveled to over 200 film festivals worldwide and garnered nominations, recognition and accolades from the Golden Horse Awards, Golden Bell Awards, Taipei Film Awards, ContentAsia Awards, and Variety to name a few. Due to COVID restrictions, the 2021 GagaOOLala Originals Showcase, held together with TAICCA (Taiwan Creative Content Agency), was moved online. However, despite such limitations, the event saw more than a hundred attendees, including partners from Japan’s TV TOKYO, Korea’s WATCHA and LYD, GMA from the Philippines, mm2 from Singapore, NBCUniversal and Facebook, all of whom expressed high levels of interest in GagaOOLala’s LGBTQ + BL content. This year, GagaOOLala will be holding another event with TCFF (Taiwan Creative Content Fest) titled “Content in Focus: LGBTQ + BL GagaOOLala Showcase'' on November 11, 2022 at the Taipei New Horizon Building (6th floor, No. 88, Yanchang Road, Xinyi District, Taipei City, Taiwan), where attendees will be able to join the showcase both physically or online. With the success of its critically acclaimed lesbian series Fragrance of the First Flower, dark short film Light and Asia’s first ever gay parenting drama Papa & Daddy in 2021, GagaOOLala is now prepared to take its next step into the future by showcasing all its most anticipated projects through 2023 -2024. The platform will also be showing how it will evolve from a unique queer filmmaking ecosystem into a brand-new “GalaVerse,” where its original IPs will connect with other sectors within the content industry to expand the pink economy. The content to be shown include Fragrance of the First Flower Season 2, First Note of Love—a musical BL series akin to the film, Begin Again, the series version of Light, Taiwan’s very first gay reality show Boys Like Boys, the animated version of Papa & Daddy, and a curated selection of hit BL titles from across Asia that were licenced to GagaOOLala and, in turn, streamed all over the world. Worth noting is that the gay dating reality show to be co-produced by HahaTai, Taiwan’s leading digital media brand, and GagaOOLala, Boys Like Boys— expected to be the gay version of the Korean dating show Single’s Inferno and the Japanese Terrace House— opened entries for its audition on September 14. Within mere 24 hours, hundreds of gay men entered and completed their sign-up forms. The number of auditionees is soon to pass four digits and is continuously increasing by the day. The auditionees are of great occupational variety, with people from all walks of life such as prominent YouTube content creators, social media influencers, students, policemen, firemen, teachers, and even pet whisperers. Soon after it was known that the show will be covering plane tickets and living expenses for overseas participants, a large number of sign-ups swarmed in from over 18 different countries. Entries for the audition will be ending on November 11, 2022. Compared to last year’s program in which each title was separately introduced, this year’s showcase is organized into six themed business integration projects that encompass GL, musical BL, dark BL, gay family, gay dating reality show, and Asian BL. By holding this showcase, GagaOOLala is hoping to bring their potential business partners into the world of pink economy, where creative minds may join their resources and funds to help Taiwanese LGBTQ+ and BL content capture the hearts of viewers all over the world.