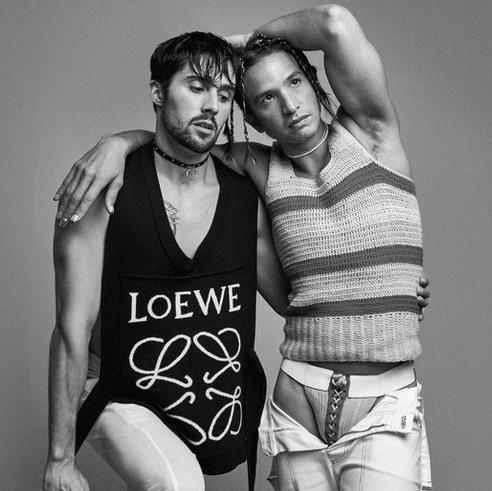 For the longest time, the world as we know it has carried all of us from moment to moment. We got too caught up in our mundane lives and forgot one of our most basic instincts as humans — to live.

But as the world takes its course on a different path, it made us take a step back and question what we're doing and why we do it— like an inward portal that allowed us to explore our genuine thoughts and feelings.

We lived our lives believing on the certainty that we had our future within the grasp of our hands. But things have changed in a blink of an eye, and now we are running towards the inevitable.

With that said, for our latest issue, we dived into the unknown with Markki Stroem and Nico Locco, the stars of the upcoming BL series Love At the End of the World.

Some say the world will end in fire, and some say in ice. Every few years, or maybe even every few months, a conspiracy will go viral, claiming that the end of the world is near. From biblical prophecy to a rogue asteroid or comet slamming into us — it is a never-ending cycle of stories. However, one thing is for sure for Markki: in life, we need to be present in every moment and move towards new heights.

When asked about what he thinks about the end of the world, Nico said that he firmly believes that it'll eventually happen. "I always hear like theories that the sun will explode eventually and everybody will die or an apocalypse or something like that, or a pandemic that wipes out everybody, the entire human race." He said. "I don't think in our lifetime it'll happen, but I think we should think that the world is ending because maybe we'll appreciate things just a little bit more."

And true enough, since the pandemic started, we have come to realize and appreciate every little thing around us. Life is too short, and we need to value each day to the fullest and make the most of each day we live.

Love At the End of the World

While the idea of the world coming to a tragic end isn't exactly foreign to all of us, one question remains to be asked: What would you do if the world ends tomorrow?

It's one of those tricky questions that would really make you look back at things and internalize your life at its peak. Lucky enough, in their newest project, Markki and Nico are set to give us a glimpse of how it truly feels like if you only have days before the world ends.

Love at the End of the World is a Filipino BL series directed by Shandii Bacolod under Temporary Insanity Pictures, featuring actors like Kristof Garcia, Gold Azeron, Rex Lantano, Elijah Filamor, and more. The series follows a handful of disparate people's lives as they collide in interweaving stories of love, romance, loss, loneliness, forgiveness, and redemption in the last seven days of existence.

BL series has become increasingly popular in recent years, and we have witnessed different stories and representations for the LGBTQIA+ community. However, Markki and Nico promise that the series will take you on a rollercoaster ride full of laughter and pain.

"I think the big takeaway after watching 'Love at the End of the World' would be that love is the single most powerful thing in this world," Nico said. "That love is the thing that brings every one of us the most happiness and brings the most satisfaction in our lives before dying."

"I want the viewers to come in and basically see that at the end of the day, love is love whether it be between two men, two women, straight men and woman, a polyamorous relationship a trans man and his non-binary life," Markki added.

In the new series, Markki will play the role of Mark Anthony Handang and will be paired with Arab-Filipino newcomer Khalid Ruiz. According to direk Shandii, Markki will play a hot lad from the province who personifies all that's good in our society. His character will tackle forgiveness, resilience, and the power of love. On the other hand, Nico will play the role of Tony, a man who has had a difficult life. His loneliness, depression, sadness, and regret lead him to go to the Philippines to plan his perfect suicide before the world ends.

"I was very interested in doing a BL series before I just wanted to make sure that it was the right project for me," Nico shared. "So I felt like when I was presented with 'Love at The End of The World' and saw the character of Tony, I mean, it was perfect for me."

In line with Love at the End of the World, Markki is also very thankful that the series tackles real word problems such as the importance of mental health in these trying times. The singer-actor recently released a single called, "Sanity," which he recorded in collaboration with the Psychiatric Association of the Philippines.

"Just like this series, there's a lot of tragedy happening in our world, and a lot of people feel like it is the end of the world especially, the deaths, all of the potential suicides in this world," Markki reiterated. "What this story is trying to project to all of the viewers is that even if there's a tragedy in the world, there is hope."

Love at the End of the World will have nine episodes with different storylines intertwined with each other. The first episode will be "Melancholia," followed by "The Loneliest Man On Earth," "We Need To Talk About Tony," "Happy Together," "It's Raining Fish, Hallelujah!," Tell Me That You Love Me," "B-824," "Dear White Boy, "Bang! Bang! Who Shot My Baby Down?," and "Nostalgia."

The end of something, or death, in particular, can be a very uncomfortable and emotional subject to discuss for some of us. Truth be told but, no one really likes to think of their own death. However, Love at the End of the World takes us on a different horizon on how to view and face our last days on the earth.

"This series wants every viewer to know is that even if there's a tragedy in the world, everyone will just die, which is inevitable. Everyone is going to die and live your life with love," Markki reiterated. "As I said before, live your life with goodness and happiness and just be kind. To everyone around you, because you don't know what they're dealing with in their lives."

"At the end of the day, everything we do in our lives is encircled around the one single force of love," Nico added. "It's the strongest and most powerful thing on this earth."

More than the surface level of the series, Love at the End of the World really wants us to be reminded that in a world where we easily succumb to our fears, anxiety, and grief, there is love to be found even in our darkest situations.

*Love at the End of the World has yet to announce its release date and it is expected to be an exclusive for GagaOOlala, the global streaming service for Asian #LGBTQ+ and #BL content. To find out more, check out Temporary Insanity Pictures on social media.

To see more sexy photos of Markki and Nico, read the original article